Ferruzzano Superiore, A City built upon the foundations of a Neolithic Village 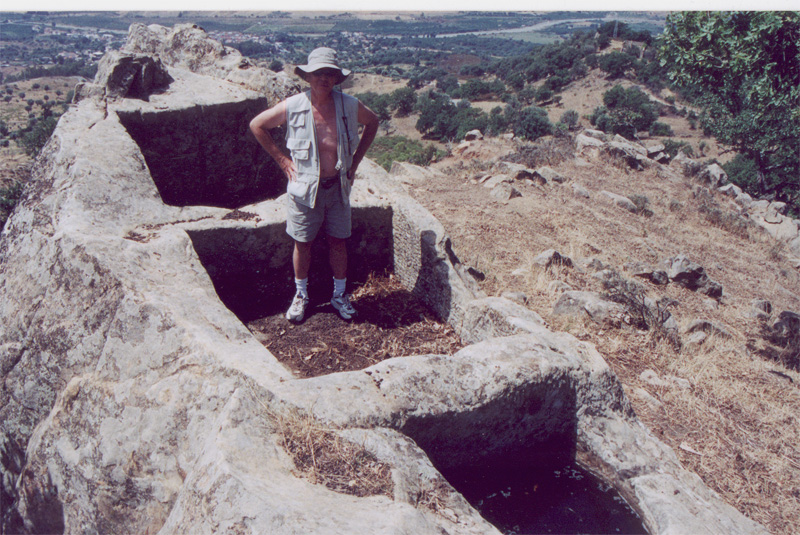 As an Art Historian and Archeologist specializing in pre-historic periods (Paleolithic and Neolithic), I have passionately dedicated most of my professional life to the study of ancient human development and behavior, analyzing the remains of structures and man-made objects and tracing them back to their very sources. These material remains constitute what I would call an “archeological record” which allows us to reconstruct the past of a given region.

Ferruzzano Superiore, has definite traces of a Neolithic settlement. Although some elements have obviously vanished due to time, erosion and simple natural decay, other stone findings have survived for millennia.

Constructing the past from these stone materials has been an exciting challenge. Some ten years ago (2001 and up until now), I began to collect data by thoroughly surveying the Calabria territory of Ferruzzano, its terrain and sites.

The first indication or clue observed were the human dwellings that manifested the existence of a Neolithic village built on the top of Ferruzzano circa 2,500 years BC.  Stone carved “rooms” are still in existence in several places, upon which later constructions have been mounted. It is most interesting that the original steps leading to these dwellings are still present.

A second clue was the finding of two ceremonial altars erected to the worship of ancient deities. Finally a third one, a processional “corridor” that possibly in its origins led the people from the sea up to the mountain through an interesting entrance marked by a “dolmen” now found with a collapsed transversal top.

Although most of these studied elements can be readily observed, it is important to note that a few factors may have conditioned and partially changed some of the actual topography and overall physiognomy of the region. These are:

3.    The fragmentation and partial destruction provoked by mountain sliding and earthquakes

It is also important to consider that, to a certain extent, environmental changes (including human action), may have become hostile to man-made artifacts, causing not only partial deterioration, but some modification of their original basic properties as well.

Close and detailed observation has been the key to determining this wonderful archeological Neolithic site. In some of the crumbled most recent dwellings (homes), I found dugout rock carved with the technique of “stone carving on stone.” The hollowed away rock left a succession of  “rooms” some of which still have niches that at one time were used to place small portable “statuettes” related to fertility. These rock-cut “rooms” were interconnected from the inside with single entrances meant to protect the dwellers from external dangers and thus, safely preserve the whole community. The carving system shows a rhythmic design of short strokes (3 inches in length) in zigzag, accusing the use of stone mallets and picks (some found in the environs) that cautiously preserved the integrity of the rock. Every “room” represents a unit interacting with others; an interesting interconnection that manifests the social organization and structure of this incipient community. 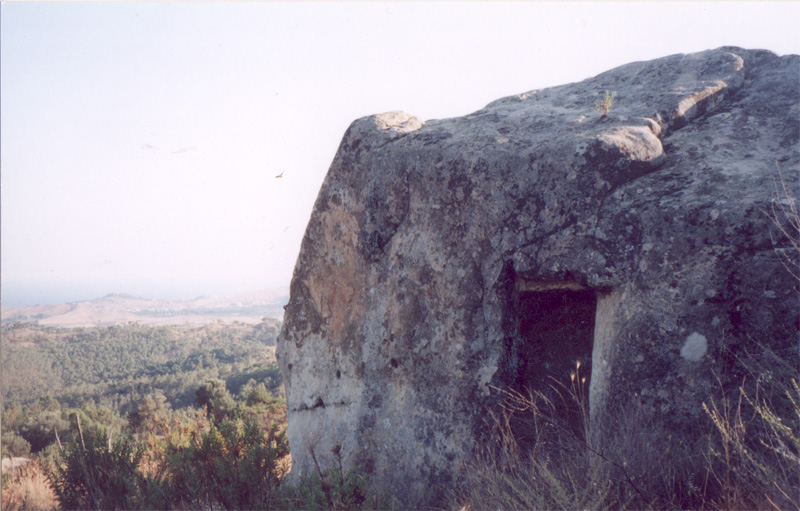 Knowing that a basic social organization and ritualistic religious beliefs are at the center of any society, at Ferruzzano we can find two important places with an obvious religious significance.

1.    Altar to Astarte (also Astaroth, Ashera) on the eastern wall of the village near the supporting walls.

This “altar” is accessed through a rock-cut stairway from below. It faces the rising of the sun and has a triangular shape with angular apex inverted. The sun perfectly intersects this altar particularly during the summer solstice. The relation to Astarte is relevant since it shows an abstraction of a vaginal shape and thus, leading the ritual to fertility. The rituals were to be conducted during specific times of the year where “mother earth” became more fertile, favoring the cycle of planting and harvesting. The predictability of a year around religious life, offered the community a framework of order indispensable for society’s sustainability. These ceremonial rites took place on the summer solstice at the dawn of day, having “Venus” mathematically aligned with the center of the altar.

2.    A second altar is found on the opposite direction and on the other side of the village (west) where steps lead to a platform with regular orifices (12 inches deep holes) that once housed the “poles of Astarte” (Phallic symbols en relation to procreation).

Astarte (from Greek Αστάρτη (Astártē)) is the name of a goddess as known from Northwestern Semitic regions, cognate in name, origin and functions with the goddess Ishtar in Mesopotamian texts. Another transliteration is ‘Ashtart’. Other names for the goddess include Hebrew or Phoenician עשתרת (transliterated Ashtoreth), Ugaritic ‘ṯtrt (also ‘Aṯtart or ‘Athtart, transliterated Atirat), Akkadian DAs-tar-tú (also Astartu) and Etruscan Uni-Astre (Pyrgi Tablets). Astarte was connected with fertility, sexuality. Most biblical references link her with the god Baal

Below Ferruzzano, in a region known as “Sacutti” (frazione Prati near the church of La Catena), I found other altars to Astarte with the same “poles” and including a carved “snake” which is also connected to rituals for fertility.

Some Biblical references to “Astarte”:

An interesting “passage” is found also on the eastern lower level of Ferruzzano preceded by a “dolmen” whose top across stone has collapsed. Apparently this was part of a ceremonial passage for funeral processions.

A series of steps lead to another altar linked possibly to the worship of the ancient god “Baal”. (The antiquity of the worship of the god or gods of Baal extends back to the 14th century BC among the ancient Semitic peoples, the descendants of Shem, the oldest son of Biblical Noah (I refer to “Semitic” as a linguistic classification rather than to a racial one). Therefore, people speaking the same or similar languages first worshiped Baal in his many forms. The word Baal means "master" or "owner". In ancient religions the name denoted sun, lord or god.) The cult of Baal celebrated annually his death and resurrection as a part of the Canaanite fertility rituals. These ceremonies often included human sacrifices. I believe that the earliest significance of the “palmenti”, was a sacrificial stone initiated in Neolithic times to offer ritualistic worship to Baal including human and animal sacrifices as purifying libations. Later (during classical times) it evolved into the use for wine production but still related to wine as a metaphor for “blood”. A wonderful description of the further use of the “palmenti” can be found in one of the most important and thoroughly researched document written by Professor Orlando Sculli in his book “I Palmenti di Ferruzzano.”

Following the steps of this sacrificial stone, I found another altar and a few yards below, a spherical one-piece stone similar to this one:

Some Biblical references to Baal:

There is no doubt that Ferruzzano has been an important Neolithic village. I also believe that the entrance was through the “fiumara La Verde” that at one point was part of the Ionian sea that extended its coast almost to the feet of Ferruzzano. This would explain the distribution and location of altars and dwellings.